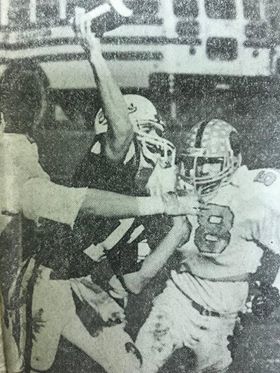 Chatham -- Mark Roedelbronn, a Chatham, NJ resident and the city of New Brunswick’s Housing Authority (NBHA) Director (NBHA), was found dead at home on November 24th 2017, according to a person familiar with the matter who spoke on the condition of anonymity. Roedelbronn played college football for Fairleigh Dickinson University (FDU) in the early 90’s, where he holds several records to this day. Prior Roedelbronn played Quarterback under Coach Marcus Borden and led East Brunswick High School to the Group 4 State Championship Game. Back in the 80’s Roedelbronn played with Josh Miller, Bryan Fortay,Ken Prus, Bob Rushnak, Andy Wehrenberg, Keith Chalecki, Mike Bastkowski, Barry Flannigan, among other greats. Back in the 70s his brother Chuck held many records in Paralympics Weight Lifting. Incredibly his brother was his motivation for trying football as Chuck played tackle football in neighborhood games in which he was paralyzed by a condition called spina bifida. He could only walk with the assistance of braces and crutches. He wouldn't allow his disability to slow him. Mark Roedelbronn recently came up against some problems with people at weekly NBHA meetings. No foul play was suspected according to the police report. The service will be held at Corpus Christie Church on Thursday 9 AM. 100 James Street, South River 08882